“Bumblefoot is the official music partner of Spaced Out Radio.”

Ron ‘Bumblefoot’ Thal is an award-winning vocalist, songwriter, producer, and world-renowned guitar virtuoso, with over 25 years of releasing music, playing international festivals and headlining tours, and gracing magazine covers as a solo artist.

Bumblefoot’s recent Little Brother Is Watching album is an eccentric, upbeat collection of epic rock with haunting melodies, huge choruses and witty lyrics about life in the digital age and beyond. The album was composed, produced, recorded, mixed and mastered by Bumblefoot at his own studio, and includes a crowd of 100 fans stomping, chanting and singing backing vocals recorded at a listening party in New York. The album peaked at #4 on Amazon.com Rock charts globally. The album is released on David Ellefson’s (Megadeth bassist) EMP Record Label, now available in retail on CD and vinyl.

Bumblefoot is also an accomplished composer whose music is often heard in TV, film and video games, including the theme song to VH1’s “That Metal Show”. Bumblefoot is an Adjunct Professor at SUNY Purchase College teaching music production, works with U.S. Embassies around the world on cross-cultural music programs, has his own line of award-winning hot sauces, and works with dozens of international charities visiting orphanages and children’s hospitals around the world with guitar in hand. 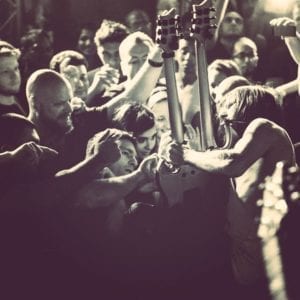