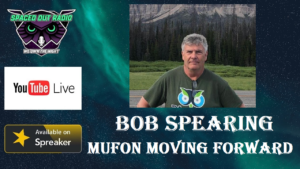 The event is finished.

Bob Spearing graduated from Fordham University with a B.A. in Communications with Journalism and Film Production as major concentrations. Bob recently retired from the Port Authority of New York & New Jersey after 34 years. His many duties included being an FRA licensed Rail Traffic Controller and Locomotive Engineer. While in management he was a Safety Investigator, Contract Administrator, prepared multi-million-dollar budgets, managed public relations and curated historical railroad exhibitions at a major regional transportation hub. Bob joined MUFON in 2014 as a Field Investigator and has previously been National Director of both Spain and India and led MUFON’s Special Assignment Team. Bob has long been involved with our various special projects including MARRS and the Pine Bush, N.Y. UFO Museum. He has had numerous articles published in various UFO related magazines around the world including two MUFON Journal cover stories and he has appeared in several television series as a photo analyst. A life long UFO enthusiast after reading Frank Edwards’ “Flying Saucers, Serious Business” as a child in the 1960s, he has only had two Ball of Light (BOL) sightings to speak of but has concentrated his area of expertise around that particular phenomenon as a result.