Science and UFOs with Dr. Paul Kingsbury and Robert Powell 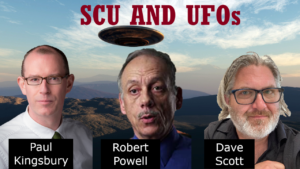 The event is finished.

Dr. Paul Kingsbury is a Professor of Geography at Simon Fraser University. He is currently in the final phase of a 4-year research project, funded by a SSHRC Insight Grant and assisted by 3 graduate students, that examines the growth of paranormal investigation cultures through a study of the “lived spaces” of fieldwork, conferences, and community events in North America and Europe. This research has involved attending UFO, Bigfoot, and crop circle conferences, studying UAPs with Charles Lamoureux and participating in ghost investigations with groups across the Vancouver region and partaking in Bigfoot expeditions in British Columbia. Paul has shared his initial research findings with numerous media organizations including Newsweek, Coast to Coast AM, and the Discovery Channel. Once the fieldwork is complete, Paul will begin writing a book, tentatively titled, “Investigating Paranormal Investigators.”

Robert Powell has a BS degree in Chemistry and is a former collegiate debater. He has 28 years experience in engineering management in the semiconductor industry.  While working at Advanced Micro Devices, Robert has taken numerous internal courses related to device physics, design of experiments and statistical analysis.  He helped Advanced Micro Devices develop its first flash memory technology that is used in today’s flash cards for cameras, PCs, video cameras, and other products.  Robert’s experience includes managing a state-of-the-art chemistry laboratory and managing a Research and Development group that worked on nanotechnology using atomic force microscopes, near-field optical microscopy, and other techniques.   Robert is also a co-holder of four patents related to nanotechnology.  Robert Powell was the former Director of Research at MUFON from 2007-2017 and created MUFON’s Science Review Board in 2012.  He is one of two authors of the detailed radar/witness report on the “Stephenville Lights,” as well as the SCU report “UAP: 2013 Aguadilla, Puerto Rico”.   Robert is a member of the Society for Scientific Exploration, the UFODATA project and the National Space Society.  He is active with FOIA requests to various government organizations to obtain information on historical cases and is a co-author of the book, ‘UFOs and Government: A Historical Inquiry,’ published in 2012.   Robert currently resides in Austin, Texas.