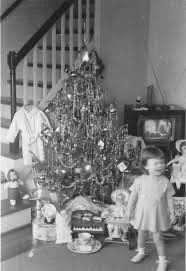 It’s Christmas Eve, and I just remembered my very favorite trick I thought I’d played on Santa. First of all, when Santa came to our house, he didn’t leave wrapped presents; the old fella must have been too tired for that, so he always left three stacks of unwrapped gifts for my siblings and me. They looked mighty fine under the tree, and we knew immediately which gifts were our’s, because the piles of presents had what we’d asked for, sitting there, all ready for kids’ Christmas joy.

I believe I was about five on this particular Christmas. We were supposed to stay in our rooms until everyone was awake, and then we could go see what Santa had brought. I never could comply with that rule, and when our parents finally went to sleep, I would get up and sneak out to the living room to see what had been left for us.

I tiptoed out of my room, and in the living room found the tree still lit up and the stacks of gifts, each left exactly in our birth order. It was so beautiful, the sight took my breath away.

My gifts were in the middle, and it took me no time at all to kneel down and check them out. That’s when the worst, thing, ever, met my eyes. I had a doll and my sister had a doll. Dear Lord, what had Santa been thinking? Her doll was beautiful! It had a gorgeous face, green velvet dress, and shiny golden ringlets that were perfectly arranged around her face. I had the ugliest doll I’d ever seen, wearing a blue print cotton dress, a homely face, and frizzy short brown hair. Ugly is an understatement!

As I sat on the floor, wondering if Santa had lost his mind, it dawned on me; no one but Santa Claus and I knew of this dreadful mistake. I could fix it, and all would be well, no one the wiser. So easy to remedy: I simply switched dolls from one pile to the other. I had never felt so clever, before.

Jump forward to everyone being awake, and running to the living room to find our Christmas presents. The first thing my sister and I picked up were our new dolls, happily embracing such lovely gifts.

Then the shrieking began! Our mother was not happy with what Santa had left for my sister and me. She was yelling, “NO, NO, NO! That’s not right!” My immediate thought was, how does she know? Santa brought them, she couldn’t possibly know I switched them. Then, without any warning, my sweet little doll was ripped out of my loving arms, and thrust into my sister’s hands, while Miss Ugly was shoved into my hands.

I was tuning up for one mighty objection, when I saw my dad giving me his well-recognized, ‘Don’t you even think about it!’ look. Since I wanted to have the rest of Christmas, and I knew quite well what would happen if I didn’t stop the drama, immediately, I hugged Miss Ugly, and acted like I was grateful. Which I most certainly was not.

I never liked that doll, even though I got pretty good at pretending I did. Unfortunately, that Christmas was also the exact time I started doubting the reality of Santa Claus. We each learn the truth about the old guy in different ways, and it’s harder for some than others. For me, it just made sense that he couldn’t possibly have been that dumb to give me the ugliest doll on the planet, nor my mother so positive which gift belonged to whom.

After that, I became much more clever in pursuit of gift identity. It involved a lifetime of finding presents, carefully opening them, and then rewrapping, so no one would know I had given myself a sneak preview of what was to come. It’s ok, Santa, all these years I’ve kept your secret, and you’ve kept mine. And it’s worked well for both of us.